My name is Alice, and this is the story of how my brother Levi got his GED thanks to Onsego. I’m very grateful to the team of Onsego for creating a course that makes people feel confident again.

Levi dropped out of high school because he was bored. He was sure that he would get his GED in a few weeks and be able to focus on his music.

Pass Your GED Test in 2 Months

Learn Just 1 Hour a Day
It doesn’t matter when you left school.

Levi passed the first GED test on the first try, he was happy, and we were happy for him. He scheduled the next test and failed. He wait two weeks and tried again and failed one more time.

I heard good stories about the Onsego course, and I told Levi about it. He signed up for the Onsego prep, but he still believed that he could pass all tests without learning. He took a few quizzes that showed that he actually didn’t know enough to pass the test. He didn’t like it at all. So, he quit and told me he doesn’t need any course.

What a mistake that proved to be! In the next few months, he used YouTube videos and some other courses, and he failed the next GED exam twice. That made him feel so miserable.

Fortunately, I was able to convince him to sign up for the Onsego course again. This time. I kept him accountable, and he also used the Onsego quitting protection program. Well, to make a long story short, two months later, he had passed all subtests, one by one.

That was a lot of work, a lot of emotions, and a lot of hope, but it worked out. I think that the way how Onsego treats people helped Levi to keep going. He saw his progress, he knew he was getting better, and that gave him the confidence he would achieve his goals.

He shared his story on Reddit; here is what he said.

“I got my GED last week and would not have done it without Onsego. These classes teach you stuff for the test and make you feel assured that you can do it. It’s different than any other program out there. I dropped out of hs because it made me feel like a total failure, but Onsego put me back on track. I wish you the same results.

Just so you know, the first time I joined Onsego, I stayed 2 days and asked for my money back, screaming that this course sucks. After that, I failed the GED tests 2 times. These failures made me feel like being at school again, and it’s hard to get back and start believing in yourself again.

I was lucky that my little sister talked me into eating my humble pie, and she signed me up for Onsego again. It took me 2.5 months to get through, but I made it and passed all 4 tests. I’m spreading the word and encouraging you to use Onsego. Thx.” 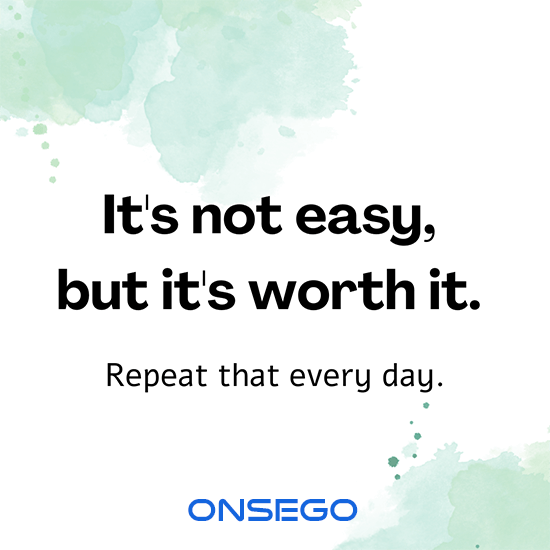 I hope that this story will help you to get your GED. Now, Levi is truly focusing on his music career and he even signed a music recording contract with one of the well-known studios. It would never happen without Onsego helping him to pass the GED Test. Our whole family is grateful.

✔ Pass the GED Test in 2 months.
✔ Protect Yourself From Quitting.