It correlates with the GED test and includes everything you need to get ready for the Social Studies subtest. 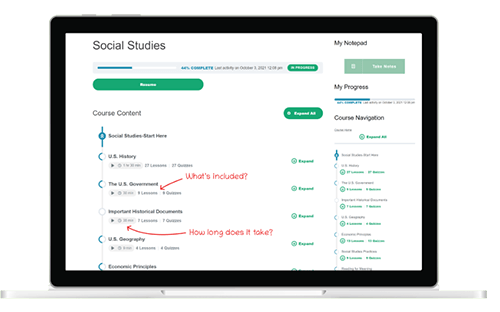 The Onsego Social Studies Course teaches you how to analyze historical and current events and documents, and how to interpret given data. This approach assures you to pass the GED Social Studies test without problems.

Every lesson contains a video, text, and a short quiz, and this combination gives you the possibility of getting familiar with the topics in multiple ways.

The Onsego lessons explain the essential elements of each topic and add context and connections among the modules to help you gain a fuller understanding of the material.

At the end of every module, you take a longer practice test with explanations that help you summarize what you have learned.

There are also 10 practice tests at the end of the course.

The GED Social Studies course is available as a stand-alone course in our Essentials plan and is part of the My Advantage plan.

How long does it take to prepare for the GED Social Studies test?

So, if you study just 1 hour a day, you will be ready in 2 weeks to pass the GED Social Studies test.

What topics are on the GED Social Studies test?

You need to be able to answer questions that check your understanding of historical and current events. You don’t need to memorize any dates but you should be able to analyze the given content. Graphs and charts are always on the Social Studies tests.

Can I check how it works?

Sure, here is a sample lesson and a quiz.

After the American Revolution, the colonies created a new plan for the government. It was called the Articles of Confederation. Articles let the states act as separate countries. Soon the states began to disagree on things. Most agreed that they needed a better plan.

In 1787, state delegates created a new government. This new plan is explained in the Constitution of the United States. It describes a system in which the federal government and the states share power. The federal government can make decisions that affect the whole nation. It can print money, control the military, and make treaties with other governments. It can also tax citizens. States can set up state and local governments, make state laws, and elect state officials. States have their courts.

They can raise money by collecting taxes from people living in that state. Some states would not agree to sign the Constitution until citizens’ rights were added. As a result, the Bill of Rights was created. It protects rights, such as freedom of speech, freedom of religion, and freedom of the press.

The Constitution divides the federal government into three branches.

Each of these branches can check, or hold back, choices made by the other two branches. This system is called “checks and balances.” It gives each branch equal power.

Politicians represent voters in Congress. They work to pass laws that represent voters’ ideas. Congress is made up of the Senate and the House of Representatives. Voters in each state elect two senators. A senator serves for six years.