Every subject is divided into modules that contain a number of lessons.

It correlates with the GED Science subtest and includes everything you need to get ready for the Science test. 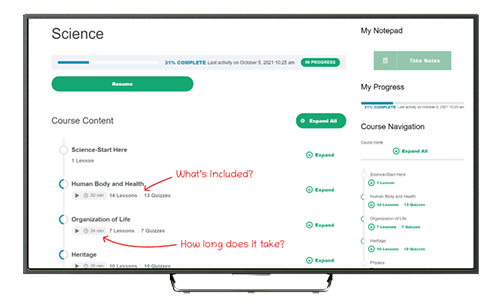 This course includes 8 modules that cover topics about the Human Body and Health, Heritage, Physics, and the Scientific Method.

When you will take the Onsego course, you will be enhancing your scientific way of thinking and inference skills. You will also learn how to answer all GED questions related to graphs and charts.

The Science course teaches you how to understand scientific facts, interpret scientific experiments, and analyze and interpret results. This approach assures you to pass the GED Science test without problems.

Each lesson includes a video, text, and a quiz. Together, these elements guide you through the GED Science topics and build up your confidence.

The Onsego lessons explain the essential elements of each topic and add context and connections among the modules to help you gain a fuller understanding of the material.

At the end of every module, you take a longer practice test with explanations that help you summarize what you have learned.

There are also 10 practice tests at the end of the courses.

The GED Science course is available as a stand-alone course in our Essentials plan and is part of the My Advantage plan.

How long does it take to prepare for the GED Science test?

So, if you study just 1 hour a day, you will be ready in 2 weeks to pass the GED Science test.

What topics are on the GED Science test?

You need to be able to answer questions that check your understanding of scientific facts and experiments. You will also need to solve a few scientific problems and interpret graphs. Graphs are always included in the GED Science exam.

Can I check how it works?

Sure, here is a sample lesson and a quiz.

The air temperature is influenced by a combination of air, land, and water working together. These 3 factors cool and heat areas at a number of rates. Temperatures also vary by season, time of day, or even by year.

There are multiple factors that affect the temperature you’re feeling right here and now. What’s your location? Just give it some thought. Wouldn’t you agree that most likely it’ll be a lot colder in Alaska than in the Amazon Jungle? Then, what’s your elevation? How high are you up? The temperature will be different when you’re on the ocean as opposed to when you’re on the highest point of Mount Everest. Do you know that it even matters whether you’re on land or over the ocean? On the land, there’ll be a bigger temperature range than over the ocean land because of how rock and soil absorb heat.

When you look at the sky, you can see what the weather is like. Clouds can make a huge difference in our local temperatures. Clouds can block the heat radiated by the Sun or trap the heat between those clouds and the ground. Weather is actually a day-to-day, short-term, pattern. Be aware not to confuse weather and climate. When looking at climates, scientists study temperatures and temperature ranges over longer periods of time, like years. The temperature that you feeling right here and now is directly influenced by the weather of today. Do you know that there are local areas that actually heat up when it’s raining? Just see that when the water vapor is turning into a liquid, lots of energy will be released, and some of it will increase the local temperature.